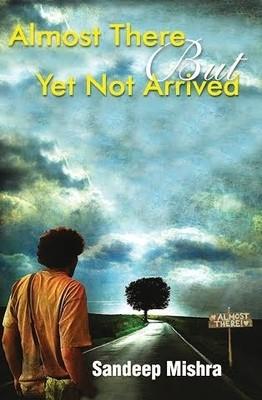 Title: Almost There But Yet Not Arrived

Right from our early years, we try to gauge success by the amount of laurels one holds or in terms of large sums of money. This book revolves around the life of a boy, Shashi, who aspires to be a winner in everything he does. The story showcases certain phases of protagonist’s life which involves various twists and turns. It serves you a simple tale laced with elements like humor, love, friendship in it.

As the back cover says:

Almost a school topper…
Almost an IITian…
Almost married my girlfriend…
Can life be worse?

As far as our country is concerned, majority of students intend to get enrolled themselves in IIT’s and IIM’s. But do they all manage to make it? Of course not. The author presents you a story of such a boy who always considered himself to be a failure as he missed his goals by a whisker. The story commences from Shashi’s childhood days, where he was always being taught about the significance of studying and scoring well, by his father. Subsequently, his teenage years were also spent in fulfilling his dad’s dreams and expectations. And for that, he immersed himself in studies and gave up all his hobbies and interests. The book then takes you to his adolescence, where achievements and applause became a major issue in his college days.

Every time when he used to strive to be on the top, he just couldn’t make it and end up blaming himself. The book deals with how this urge to become successful affects Shashi’s life.

What happens with Shashi’s life during such unfavorable conditions?
What happens with his dad’s opinions and ideas about success? Will they change? Or would Shashi continue to judge himself on the basis of how the world sees him?
Would he be able to arrive at his final destination?
What would he end up becoming – A looser or winner; you need to check it out!

The book is a riveting account of typical teenager who confronts perplexing situations, moments of anxiety, frustration along with a spark to excel. The other characters such as Shashi’s father, Vishal and Archie are described in an interesting way as they play influential roles in the story which make it more compelling. The blurb clearly indicates the theme of the book, though, the cover could be more appealing. The language is simple but the the humorous phrases enhanced the storyline.

The author is able to bring out the correct interpretation of victory. The story very well links to the present scenario of the world where almost everybody is actually racing for success without being aware of his/her capabilities and dreams. This book basically talks about a healthy life i.e. a combination of financial stability along with happiness and freedom of choice.

It was a fast read for me. I could establish a correspondence with the set of events mentioned in the story. Especially, the elucidation of an Engineering college, juvenile conversations, fun during childhood were relatable. I liked the realistic approach of storytelling that’s been adopted by the author. I loved the ending of the book where the author’s idea is to make readers discern a difference between an individual’s desires and society’s preconceived notions.

Eventually, the author conveys a powerful message to readers i.e. to trust your heart and embrace the journey.

I would like to recommend it to everyone out there who’s looking for a simple yet relatable story that represents common state of affairs in life.