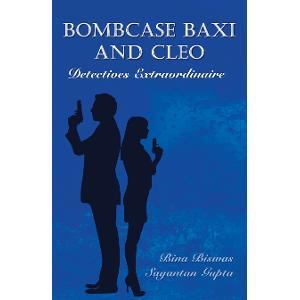 Bombcase Baxi And Cleo by Bina Biswas who is a Professor of english & Sayantan Gupta who is a gynaecologist , is a book based on mysteries & puzzles. As the blurb says that this book is a collection of 8 short stories. These mysteries are eventually solved by two truth seekers named Bombase Baxi & Cleo.

‘Scrap with a silver lining’ is a story of a Mr. Patel who was the managing director of a company that deals with the import & export of scrap metals in Zambia. He approached Mr. Bombcase Baxi who is a truth seeker, when he was hassled because of an unknown frantic call. It depicts that how Mr. Baxi initially saves his daughter Preeti with the help of some ingenious people & finds out the truth related to silver metal.

‘The missing necklace’ is a mysterious story revolves around a missing diamond necklace. Cleo & Mr. Baxi intelligently analysed the unusual situation as the groom’s mother lost her necklace in a family occasion. Eventually both the truth seekers resolves the enigma.

‘The missing Links’ is a story that revolves about an uncertain death of a man named Mr. Roy. When Mrs. Roy approached to Mr. Bombcase Baxi, He visits her place in Darjeeling to find the answer for Mr. Roy’s death. Through interrogating several workers & family members in Mr. Roy’s place, he ultimately detects the real culprit behind this riddle.

The next interesting chapter of the book i.e. ‘The Avaricious Ghost’ is a story about a house owned by Mr. P.C. Roy. He had failed to sell this property as it picks up a bad name. The people said it was haunted. Mr. Roy was bewildered. He was shattered because of an ice-cold touch on his brow at night. Seeing this, his daughter calls up to Cleo for help. Cleo after reaching at the house sorts out everything & finds the truth behind this rapacious ghost.

‘The king Cobra’ is a story related to a strange death of a renowned archaeologist, Professor S.K. Samanta by a snake bite. Mr. Baxi reaches Nepal after being approached by Professor Samanta’s son. His son suspects homicide. With the help of the local police, other archaeologists & locals, Mr. Baxi reveals the truth pertaining to this peculiar death.

‘On the Double’ is a unusual story about Mr. Pokhraj Surana who decides to gift a diamond necklace to his wife. But when he reaches at the jewellery shop for the final payment ,he finds that the necklace is fake. Mr. Surana realizes that someone has been impersonating his wife & she is the one who managed to purloin the real necklace. Cleo comes up to solve the mystery when she was been called up by Mr. Roy’s daughter, the owner of jewellery shop. She eventually solves the riddle by the support of local police, & interrogating several people & suspects in the case.

‘Where is the Body’ is a story about Mrs. Shalini Kulkarni who comes up in police station to file a report of her husband ,Mr. Rajiv kulkarni being kidnapped. Mr. Deshpande , a police officer who was examining the case considers it to be a homicide case. His friends Bombcase Baxi & Cleo also assist him in this case. Eventually they find out the reality by interrogating various suspects of this case.

‘And Broke His Crown’ is the concluding chapter of the book which deals with story about Gomez who was been accused of murdering Thakur Sahib as Gomez was only the person when Thakur Sahib was killed. Gomez, the gym instructor who had a very special relationship with Malini, the wife of Thakur sahib. Cleo comes up to take the case when Malini called her. She investigates the case & finds out the truth.

This book is composed of short tales related to puzzles, mysteries & suspense. The author has plot the characters in a very interesting way. The short tales by the author are narrated in a very simple way, yet the stories are effectual. The book depicts some of the very peculiar homicide mysteries which are written in a very convincing manner. The prime characters of the story i.e. Mr. Bombcase Baxi & Cleo, both were impressive & imposing. The end of all the stories are quite unpredictable. The book is capable to hold the attention of the readers till the end.

I felt that this is the book was a light read along with some intrigue. The two truth seekers( Mr. Bombase Baxi & Cleo)had a brilliant intellect, judgement, understanding & sharpness. At some points , I was very inquisitive & fascinated by the story ‘s twist and turns. For me, the book was plethora of adventures & secrets. The way how the two truth seekers were immensely intense to find out the truth was captivating. The author was successful in grabbing my interest.
The book is a combination of thriller, suspense, escapades, & enigma. If you enjoy reading such kind of book this is the book for you. If you want a light read, you’ll enjoy author’s style of writing. On the other hand ,if you’re looking for a romantic or a horror suspense , this ain’t the book for you.