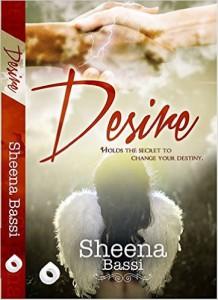 Blurb:“Desire…, holds the secret to change your destiny.”

“Ryma’s desire to save her son enforces her to agree for a deal. Unknowingly, her yes to a deal involves her in a web planned by an evil spirit – a threat to mankind.

Realizing the truth, Ryma determines to fight back. Ira’s last four words propels her into an adventurous journey that includes unfolding a mystery, sneaking in the hidden passages of Rajasthan that ends up revealing the secret buried from a century ago.

Where will the search take her? Does her wisdom enable her to transform the demon into an angel? How would it affect their lives? How would her desires help her to overpower the toughest circumstances?”

My View : ‘Desire’, a story which promises to bring the lost desire in people.A story in which goodness win over evil,which as a message is being conveyed to readers through a story which is accompanied with black magic.This might be one such story which many of us would strive to read,which has something delicious to serve to readers, with a bunch of  suspense, anxiety, thrill, romance and true love.

The story moves with such a great pace in the beginning that it was hard to feel and relate with the situation in the given time.The nature of incidents lined up for the readers are somewhat different from what we go through in our usual life.As story races to cover the tracks reader would feel completely left behind in the beginning, but when Karan arrives in the picture everything fall into place, and there where reader would feel his/her presence to witness the story.

What became the major hindrance in the journey is -What to say at what time and at what place.The only thing that caught me is the story,the suspense it holds, the pages it reveals , and the unexpected it has for readers.The plot she has knitted is interesting, and at every node she has something thrilling to serve to readers.This made reader hooked to it, until he/she finds out what would happen next,and it is not that easy to predict what would happen,as authoress has maintained the suspense in a good manner.

When Ryma’s story starts to travel along with Karan, authoress more focus was to show  his richness and the exquisite delicacies he has, instead of showing her care for her son or being tensed about the upcoming incidents that was to be happened.There I felt not connected and scenes appear to be animated.Her description were not appropriate and that’s where lies the reader’s detachment from the story.Instead of having a different plot, different series of incidents, she is not able to connect to readers and her voice is not audible to reader’s heart.But, as she progresses head, her progress speaks of her heart’s involvement in the story.

She talk about Karan’s green eyes not once or twice but so many times that at one time,I was like, what is the need of talking of same thing again and again.Okay, considered he has the most effective eyes, but readers are very keen, they can get what she has in mind if she narrates it only once.In the diary,after every note the ‘Miss you’s’, after a couple of times irked me and its presence felt like forcefully injected.

For a time she is so focused to talk about one part that she forgets to talk about another one. There are many such places where such words or content took place which made me irritated like the frequent visits of her Grandmother’s advice,it looks all so artificial the way it has been presented.Apart from these loopholes, noticed in the path, she has somehow managed to keep my interest alive in the story to reach to the last page.What helped most in the journey is her writing style- simple and very-well articulated, except from some grammatical errors here and there.