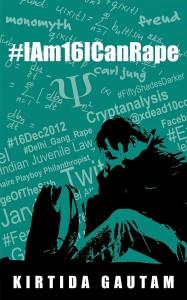 To destroy great EVIL, GOOD has to shed tears of blood. Rudransh Kashyap is a self-made billionaire  and man of high moral fiber. His life is shattered when he returns home one day to find that his prodigy, his 16-year-old grandson, Aarush, has been rrested and accused of a brutal gang rape. It is easy to say, “Kill the Rapist” but what if the accused is your child? This case takes an unprecedented turn when Aarush’s identity is made public on social media. Rudransh finds himself living a nightmare as he fights against tremendous odds to get justice for Aarush, to save him and to bring him back home…

But what if the unthinkable is true? Can Rudransh save his grandson, or will he end up fighting a different battle altogether?

Based on a very sensitive yet strong issue i.e. Rape, the book emphasizes on the mindset and emotional states of the characters. It’s a psychological thriller which elucidates the mentality of our society and judicial system towards the accused and the victim. Loaded with drama and emotions, this story has an impactful subject that keeps the reader glued till the end.

In the first place, the appealing cover and blurb grabbed my attention and I right away decided to go through it. The title is definitely bound to arouse interest in the reader’s mind. The word “rape” itself has so many notions attached to it. Each one of us have different perspective about this prevailing problem but, this is a story which analyses how the mind of a rapist works.

Coming to the narration, the book has a fragment of intrigue in each chapter which piques the reader’s interest. Every chapter very well put forward the view points of all the characters. The author comprises of a  unique and detailed explanation of each character. Their thought process, feelings, reactions and the kind of bond they share are described which makes it a long story. Also, the use of effective language, quotes and powerful dialogues makes the script engaging.

Furthermore, I find the plot quite captivating. It consists the behavior and persona of a teenager who is accused of rape. Over the years there have been a number of debates over the punishment for juvenile crimes and the story focuses on this unresolved matter.

The finale would not be able to please every reader but, the strong story line pulls the reader in and increases the reader’s curiosity to find out what happens next.

I liked how the book concentrates on the ground realities that exist even to this day. The pain and consequences of rape doesn’t stop once the rape is over rather, the situation becomes worse. The psychology of a rapist and the dilemma and fear of a rape victim is illustrated. Not only the physical pain but, it is the emotional trauma that tears the victim’s soul.

The book gives a loud and clear message to stand and speak up against wrong and injustice. Choosing such an important aspect for writing certainly deserves praise and commendation. Kudos to the author! Eagerly waiting to read more of such works.

Overall, it’s book that belongs to a different genre and very well portrays the crime without justice i.e. rape. Recommended to everyone out there!