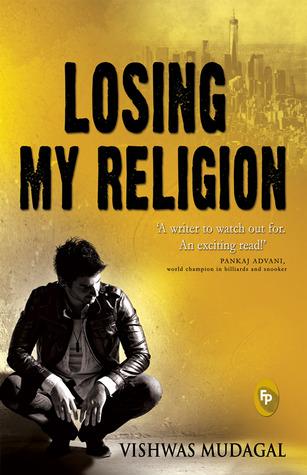 “Losing my Religion” by Vishwas Mudagal is a fascinating story of a young lad, Rishi Rai, a gamer & an entrepreneur. The book deals with how he gets involved with some unforeseeable events which change the entire state of his life. A fast paced novel with multitude of elements such as adventure, friendship, success, failure and romance which as a whole enrich the storyline.

The book presents you an absolutely passionate tycoon, Rishi Rai. The story begins with the Rishi’s financial predicament where he feels totally dispirited by seeing his gaming revolution declining. He failed in his attempt to make his dreams come true because of which he was totally shattered and disheartened. As a result, he went bankrupt & his life had gone haywire.

But as it is said that there are winds of destiny that blow when we least expect them. Something similar happened with Rishi. During his venture to take a break from everything as he had lost all his belief in all that he had been doing, he met Alex, a hyperactive, crazy, American hippie. Subsequently they together set out an unexplored journey across India, which changed the entire course of Rishi’s life. Their expedition covered several places in India. Heading towards Malana Valley had proved to be one of the most horrifying and mysterious trek for them. The story deals with how they got trapped in strange cultures or traditions of the place, thereafter dealing with an extremely freakish crowd in Malana valley and eventually getting out of it. Following to it, they moved to Om beach on the west coast where they started a shack and here Rishi met Kyra, a cryptic and enthusiastic gamer. Apparently, this turned Rishi’s life upside down. The book depicts that how this lady with a secret perfectly alters the circumstances in Rishi’s life in an imperfect way! The story also involves a fully clever and crafty entrepreneur, Mr. Wolf. His ideology related to business was thoroughly different from that of others. Besides, he played an essential role in the story. The climax of the book leads to a huge mahakumb where a series of odd and perplexing events take place. An unanticipated end of the book will certainly leave you in an extreme shock and amazement.

It is truly an amazing piece of literature with a different chain of events that ultimately lead to an extremely startling conclusion. Each character that has been represented in the book describes a strong emotion & image. All the constituents involved in the story are powerful and gripping. Such as an intense friendship shared by Alex and Rishi is remarkable, also an exceptional bond between Kyra & Rishi is a true illustration of love and affection.

It is a well written tale without stretching any of the portions, either the adventurous trip of Alex and Rishi or the ultimate finale of the story. The book is a mixture of fine segments of human sentiments, thrill, romance, dreams, ambitions, failure and victory.

This is a fresh story with an extensively new plot. The writing style of the author is utterly wonderful. The kind of sentences and expressions used in the book clearly demonstrates author’s sheer brilliance. The life of a young, zealous entrepreneur is been portrayed here which undoubtedly can inspire many energetic youngsters out there. The courage or the calculated risk taken by Rishi surely describes the zeal for success.

For me, it was an immensely interesting and addictive read. I never thought that business could be so much fun! I enjoyed each and every fragment of the story. The places, temples, valleys, beaches, and mountains across the India are illustrated in a phenomenal manner. The title of the book didn’t give me the hint of the storyline but as I got linked to the book, it was completely engrossing. After turning each page, I was more anxious to know the eventual outcome of the story. I liked the theme of the story i.e. never give up for any reason. You gotta believe yourself to achieve anything in life. Set yourself free. Confront your fear and turn the mental blocks of your life into building blocks.

A highly recommended book for everyone especially to those who want to read something new and captivating. It would definitely make your day!

Concluding with some terrific lines in the book :
“Leap out of the existence you have wrapped around yourself & take the plunge without thinking of the consequences. You’ll fall, no doubt. But sometime during that, you’ll witness a miracle taking shape around you. That’s called losing my religion.”

One Reply to “Review of Losing My Religion”