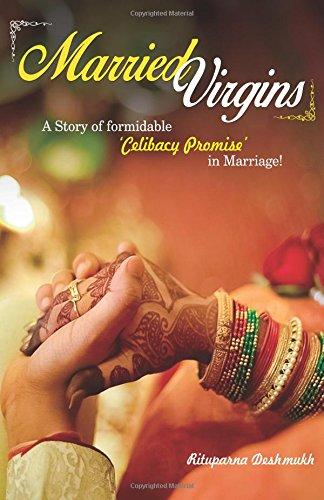 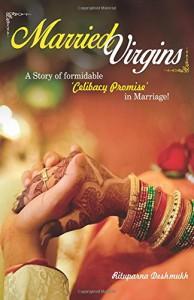 Blurb: In Married Virgins Akira, deeply in love with Usain, dreams to create her beautiful world with him. Raghav, her colleague and best friend, loves her one sided unconditionally. Akira sees her dream world shattering when her parents refuse to give their permission to marry Usain who they think is a psychopath, tainted and useless. Akira tries to make them agree but all her attempts prove to be futile. Usain’s psychotic behaviour made the issue even worse.

When all hopes were lost, she decided to keep her failed love sacred and decided to remain a ‘virgin’ throughout her life. But how would it be possible when she has to marry someone to keep her parents honour? How would her would-be-husband agree not to touch her when ‘sex’ is an integral part of marriage?

She found the solution in Raghav who was her sole companion during all this misery. She proposed marriage to Raghav with a secret celibacy promise; they decided they wouldn’t get intimate with each other after marriage.

The story goes on to explore whether Akira and Raghav manage to stay virgins after marriage without getting intimate.

How they respond to their family when it comes to having a child?

Reading the blurb, it was quite hard to keep yourself at blocking mode,regulating yourself to not to go through this story, as it speaks of excitement to endure the journey with the traces authoress has shown in the  blurb.With the concept in mind, author doesn’t only brings an interesting story for readers,but she let readers a chance to feel and enter into the protagonist’s lives to live this story.The story from the blurb might seemed like a common one, but the questions she throws at you,leave you with no option but to find them out while connecting the dots.

The way she narrated events felt like she is none other than Raghav itself,not letting herself open up to pour her thoughts.I felt little amount of hesitation in the narration where authoress wanted to tell so much, but something pulled her back.But as Raghav steadily tried to came out of his world and tried to build relationship with his colleagues, authoress too started to make a healthy relationship with the reader.Through her words she swiftly clutches reader’s hands and finishes the journey serving so much to the reader when he/she approaches towards the end.

Without a shadow of doubt, the story could be covered in a precise manner, merely taking some 250 pages or so.But after going through the story,I was not sure that if it would’ve taken a short-cut, it could be this healthy in nature.Also, she doesn’t beat around the bush, and her words just roam around the story, it was not a burden for me to cover the far-stretched story.Instead, this far-stretched story,made me more comfortable with the happenings and a friendly relationship established while covering the journey.

The sudden turn of events she overtures in the book, hooks reader at its best.Once you get friendlier with her narration fashion and covers 150 pages, you would find yourself so engaged that your mind budge you to find answers no matter how far the journey is.While pouring out her thoughts in simplest possible manner, her words somehow manages to enter your heart and force you to accompany the protagonists.

There are some missing words at some places, and some grammatical errors here and there,apart from these hitches, the book will take you to a ride of emotional turmoils twisting the story at very possible angle.

An interesting and engaging read!