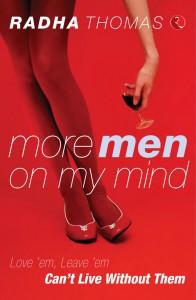 Title : More Men On My Mind

“More Men On My Mind” by Radha Thomas is an enthralling tale of a woman who’s never-ending search for a perfect date leads to a series of adventures which change the entire course of her life. The book is portrayed in an extremely riveting way and is all about the fascinating journey of a lady which takes her to places across the world in order to find her true love.

The story presents you a carefree, bold and sharp-witted chick, dealing with the day to day issues, in a hunt of an ultimate match for herself. And during her continual search, she explores various cities, places and most importantly scrutinizes her soul, her heart, her own self. As the title suggests, the book basically swirls around several men, belong to different places, professions and are totally distinct in nature or behavior. Starting from a Frenchman Jacques to an extremely unpredictable Auggie, she eventually meets a bunch of quite charming, clever to a completely freakish, suspicious, wretched sort of men who add an indelible impression on her life. The story also consists of some other interesting characters. As she struggles through her emotions and encounters divergent categories of men, her best friends or BFF’s always stood beside her to support her and even pull her up with words of advice and affection. Shas, a truthteller, who had been already working with her, proves to be a true friend and have been always there for her through thick and thin, no matter what. Also, Rue has played an exceptional role in her life. A small portion also covers the description of her family. Her mother, moreover a friend, who seek to understand her and have every time allowed her to live freely and independently. The story depicts how this Indian woman manages to find a quintessential gentleman for her life. What happens next is a sequence of thrilling events which will leave you in shock and in surprise as well..!!

The cover of the book is very appealing. The picture of heels and wine on a glossy red background is totally appropriate for the story. The book is a blend of humor and emotions. It is a hilarious take on men and relationships. In addition, it delineates sentiments and sensations from a woman point of view. It is a candidly penned story through which you would get a glimpse of author’s version of “sex and city”. The author expressed her thoughts regarding multifarious subjects such as the pace of modern life which includes relationships, bonds, break-up, friendship, love, profession, interests and much more..!!

The story contains several ups and downs in the protagonist’s life which are depicted in an amusing manner. As you will get involved with the book, you would feel the urge to find what happens in time to come. The woman’s voyage of looking for probably the best man for her is not so simple. As it is said to earn something priceless, valuable you gotta work a little harder! And something similar happened with this lady. She had to break to learn the fact based realities of life. Further, I absolutely loved the END of the story. It amazed me!

As the blurb says, it is a tale laced with unforeseen occurrences that take place in protagonist’s life. I liked the author’s outspoken and sarcastic approach of narrating the story. Her skilful twist of words, remarkable anecdotes of culture, delicacies and city made the story even more captivating.

Besides, I liked the intrinsic theme on which the entire story is based i.e. “Some things are worth waiting for. The most precious lessons or some of the best stories of life are gained through hard times, mistakes, insecurities, struggles.” All those who want to read something light, comic then this book is a nice one time read.