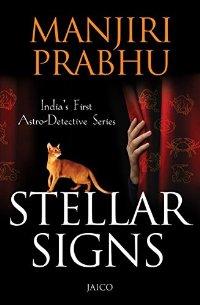 “Stellar Signs”, is the second book in the astro-detective series ,interwoven with intelligent stories, sprinkled with suspense,and excitement that fills readers with inquistivity to know what would happen next.All the stories are based on different cases that the exemplar solves through astrology and her tactful mind.

As the back cover says :’After a slow start to the new year sonia samarth’s crime solving services are in high demand. There is the bride whose arranged marriage may include murderous in laws, the theatrical team whose death scene was no act, and the deceptively happy couple whose stars foretell domestic danger.

Good thing Sonia has her opinionated assistant Jatin to help, except that even he may be caught up in the unlawful fray. Fortunately, it takes more than a few misguided souls, not to mention a preposterous proposal from the world’s most notorious diamond thief, to rattle this yoga- practicing, astrologically inspired sleuth.’

If you haven’t read the first book of this series, you don’t strictly require to go through the first book (but the first one is very-interesting ,beyond a shadow of doubt),you could easily go with this one as in the very first chapter you would find glimpse of the characters in order to provide readers a proper background.

Albeit this book consists of series of different case-solving stories, but they are internally linked to each other, so you can’t skip the stories like that,as it would hamper in the proper flow.

Like the first book in the astro-detective series named “The Cosmic Clues”,authoress has coated the stories with a feather-like writing style, festooning the book with a soothing writing-fashion.The book lucidly shows the great humour of the authoress, and the way she has intelligently implemented them.

The stories that I liked most from this book are :
“Checkmate” and “Anything for love”, both these stories hold rare imagination and the both of them are executed and implemented in an outstanding manner and that makes them stand differently in the crowd.

The only downfall I found in the book is – the pattern of solving the cases seems little bit monotonous as it progresses towards the end of the book.

After going through the first book, my expectation from this book is way high.I was expecting it to be way energetic and powerful,but my excitement towards this book fails to approach to that extent.I’m not saying that this book is not worth a penny, instead this book is worth a read,but comparatively I liked the first one.As in this book, at some places I feel like suspense is forcefully knitted or presented in a manner which is not so captive.

All in all, an interesting and intellectual book that holds the power to keep readers hooked to it, and it embraces the mystery as the way it proceeds.I would like to recommend this book to all mystery lovers out there.