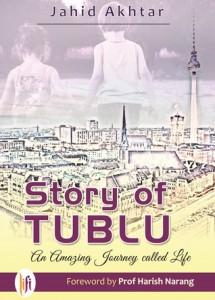 Life is a journey with several twists and turns which eventually make you a better person. Such is the story of a young lad, Tublu who goes through several phases of experiencing and reacting. Like all, he moved through life, through juvenescence to adulthood. The author’s debut book is a detailed account of life that covers all the stages in which the protagonist’s life is filled with dreams, passion, attachment, despondency, reflections, adoration, flashbacks and much more.

Blurb:
“Devastated by the floods, Bipin and his little boy Tublu move to a faraway land, where they meet the Sharma’s. This marks the beginning of a long and enduring relationship between Bipin and the Sharma’s, and the growing friendship of their children Tublu and Maina. The book captures the journey of this friendship through childhood to adolescence and into adulthood. From some interesting school and college humor, the story progresses on and develops into a mature narrative. As years pass, Tublu’s plain and silent crush on Maina develops into deep love and longing for Maina which bears the potential to conquer all of life’s challenges. The story has its share of drama, that entertains; humor, that makes one reminisce; love, friendship and emotions that defines the amazing journey that is, life.”

My View:
An environmental catastrophe forced Tublu and his father to find somewhere else to live. In the midst of their struggles, the book presents you a kind family, Sharmas. Tublu and his father were deeply moved by their obliging response and both the families embarked on a new journey of trust and bonding. Moreover, it succeeded in sowing the seeds of love in the womb of Tublu’s heart for Maina(Sharma’s only daughter.) With such simple beginning in the late eighties in Assam, the story has different shades of life which eventually come to an end in Berlin.

The tagline adds the finishing touch to the title of the book. The simple story line incorporates divergent aspects of life. From the elucidation of school days, fantasy, innocence, first love to those thrilling college times, hostel life, hesitancy, flashbacks; everything has its share of drama, feelings, heartbreak, relationships which defines ‘an amazing journey called life.’

Several characters in the book are well portrayed. Apart from the protagonist Tublu, I found Shilpa’s character to be quite powerful and pleasant. Each character has its own significance in the story. An easy plot with very simple language complements the story. However, I felt a lack of interesting dialogues which consequently made it mundane at certain places.

The blurb goes well with the story. I liked the simplicity of the story as it comprises quotidian situations which are illustrated greatly. There is a consistency which keeps you glued till the finale. The cover seemed attractive to me. Furthermore, I felt that the title could have been more appealing. According to me, the foreword initially mentioned in the book can definitely lose the reader’s interest. Therefore, the climax of the story has no surprise element and is predictable.

The book not only concentrates on the basic theme of love but, the author’s narration also includes other emotions. There were certain portions to which I could relate. Such as the anecdotes of the engineering college, ebullience of students and the significance of family and friends in life.

All in all, it is a simple, light and fast read.