Title: The Agony of Love 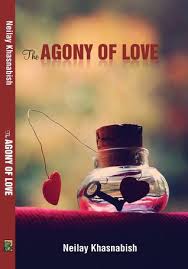 The Agony of Love is the debut novel of the author Neilay Khasnabish.It is a love story in which protagonist faces several peaks and valleys from procuring a job to seizing his love.

As the blurb narrate : ‘The Agony Of Love’ is a love story of a young poet Srijan Ghose-a frustrated young poet, who fails to get a suitable job – falls in love with Priyam Majumdar, who is reading for an M.A. at Delhi University. In Delhi, Srijan’s elder brother Bijan finds a corporate job for him, but he refuses the job offer as Priyam inspires him to write poetry and to do a Ph.D. at Delhi University. Suddenly, some strange things start happening to him. He is kidnapped twice and tortured to compel him to leave Delhi and Priyam. Meanwhile, his elder brother Bijan asks him to leave his flat. Srijan leaves his flat and finds a job at a garment shop. Now, he has to find out his kidnappers, and if Priyam will marry him. ‘The Agony of Love’ addresses frustration, inspiration, love, greed, violence, jealousy, betrayal, hope, and success. The dimensions of relationships are explored to the core to focus on the colours of life, in the context of the conflict of humanity and inhumanity.This story in the guise of fiction is the offshoot of firsthand experience of life.’

The title of the book suggests that there are situations which drives the protagonist life in an uneasy way and forces him to catch the stones of dolour around him. The cover shows the two hearts one is inside the bottle and other is outside the bottle tie-up with a wire and a key is encase in the bottle depicts that both the hearts are coupled with each other but are distant from each other.

In the story the protagonist Srijan Ghose left his home in search of a job to Delhi where he stays with his brother.Srijan fall in love with Priyam who inspired him to write poems,after which he wrote his first poem ‘The Fragrance’.

The story rolls around protagonist life who sporadically watches the bird and capture them in his thoughts.He decides to stay in delhi so as to be nigh to his love Priyam and narrate his poems for her.He is kidnapped twice and tortured not to love Priyam,still he is adamant at his decision,his thoughts and his love.He let the no stone unturn to achieve his love.Later on he left delhi to complete his Ph.D in Kolkata and in a belief of conquering his love.

I found the writing style simple with easy vocabulary and light read.For a neophyte it is a good one to go through.I could predict that an avid reader can complete the book forthwith. Although I found the story as-usual and look-alike other love fictions.Onset I found the story little bit insipid but later on as the second half begins it is compelling.I found the linking of the story weak and fluctuating and it may addle reader’s mind sometimes and may peeve them too.

A general story with frequent situations having perfunctory way.A trite story indeed.I would say it will be a good select for a neophyte.