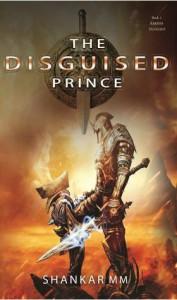 Blurb : You are neither a good warrior nor a good leader.” These words haunt him.

Raksha, a young prince, decides to prove himself and seeks a path not knowing where it will lead him to. However, his destiny has other plans.

On the journey, his life evolves into an epic quest filled with magic and intrigue, which he never dreamt of.

Set in a fantasy land Riloriya, this water kingdom is not the same as it was five hundred years ago and its history is mystery now.

What will be his part in unfolding an ancient mystery?

With the arrival of Disguised Prince in this world, comes a promising writer with his sword to showcase his art in the magical world of fantasy giving his thoughts a life in the literature world.The Disguised Prince is a story of a Prince,who with his heroic deeds, entertains reader at its best.The thrill of fantasy has its own magic over me,and when author promises to come with its sequel, there comes the excitement as a complimentary gift attached to it.

Initially,I was not comfortable with his writing style.The way he articulates sentence didn’t make me satisfied to the core.But as soon as I covered one-third of the journey, there was no option of looking back and stopping for a moment.It suddenly became so engaging , that I found myself so engrossed in the story.The sudden rise in level of excitement and the new found zeal empowered me to complete the journey in a single sit.

The amount of humour poured in this book is sufficient enough to complete the journey without a hitch.As in the first half of the book, author was trying to create a base for the story, so the events that turned up shows normalcy in their moves, and to find out the enticing facets of the journey, one has to bear this part in order to advance  in the journey.First half covers the questions like how, when, why and what, while the second half lays the fun and oomph, one could feel while tracing the curves.

The node from where the story starts to the node where it ends, covers the journey of a Risen Hero,which as a concept, we had encountered and praised and loved, many times.Swaying his sword on the same concept, he pens an interesting story with his pen of wild imaginations.There is no way one could miss the thrill he has poured in this book.The balance he creates while narrating several incidents at the same times draws the images very clearly leaving no space for chagrin and disorientation.

To create curiosity back in the mind of readers, and to keep their interest alive in the journey, it is very necessary to serve them something fruitful after every regular interval.With this book, come some secrets,along with the fun and excitement to uncover them and the zeal to move ahead to come face-to-face with the events lined-up for the readers.As one gets comfortable with the writing fashion once, and reached to some 100 pages, there’s no way one could back out.This book has something or the other to play with your mind all the time.

Eagerly waiting to get drenched in the pool of wild imaginations.Book 2 in the series of Raksha Duology is heartily welcome.Keep writing, keep thrilling readers with your sword.Hope your wild imagination stay alive for years!

Warning for author : I expect much more from you in the second series.