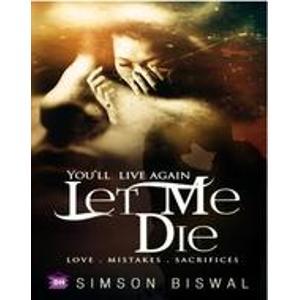 “You’ll Live Again Let Me Die” by Simson Biswal, the founder of Dream House Publications, is a harrowing story of a young lad. The book depicts the intricate and tangled life of a boy. The typical prospects related to a youngster life such as love, friendship, heartbreaks, dreams, mistakes, and despair are illustrated in the book.

As the front cover says that it is a tale which consists of three supreme elements-love, mistake and sacrifice. The story commence with a typical conversation between some friends. In the due course their discussion shifted to love topics. Further, everyone expressed their views on people who commit suicide because of heartbreaks and discontent. According to them, these people have sick mentality and they are weak hearted. But one of the friend disagrees from this point and in his opinion, sometimes situations force someone to end his/her life and no one ever does it for fun. And then the story of a 20 years old, Robin Das begins..

This is a story of a passionate and ambitious mind, Robin Das. He belongs to a middleclass family and so evidently he has been referred as a 20 years old ‘common Indian’ in the book. But there is an another major reason of stating him as common i.e. due to his dreams and strong desires. The dream to achieve something significant and the urge to reach somewhere makes him slightly different from others. In order to attain his objectives he moved to an other city for pursuing electrical engineering. The entire story revolves around him, his friends and his love. The plot consists of some vivid characters such as Chetan and IAS, robin’s friends, also Kriti and Ashama play an essential role in the story.

Right from the very first day of college robin’s friendship with IAS and Chetan has grown along with him. Besides sharing the room, they shared everything: every idea, every worry, every burden, the smiles, wiped each others tears and supported each other in tough times. The story illustrates that how Robin fall for a girl, Kriti. His first love changed his life, it was a fresh beginning with happiness filled in their hearts, a new promise which brought new hopes and expectations. But life played its own truants. His breakup with Kriti left him crashed to the ground in agony and distress. The book deals with how Robin learnt lessons from his failed love and heartbreak. It is interesting to find out that what happens when life gives him a second chance by starting all over again. The second half of the story depicts that how destiny determined his decisions of life when he meets his love again.

The author put forwarded the prevailing situations of life in the story. Each side of love is portrayed in a fine manner in the book. Either it is the essence of first love, the grief and sorrow that one experiences during love or the misapprehension between partners. The title is perfectly appropriate for the story. One can certainly guess the theme on which the entire tale is based. Also, the cover page of the book represents the subject matter. The story is laced with multitude of emotions and constituents which makes it more captivating and intense.

The story is basically divided in two halves. The first half delineates the bond of friendship, the feelings of affection and care, and the contentment in living a life for your loved ones. While, the second half describes about the harsh realities of life, betrayal by your love, lessons which life teaches you in torment and desperation & the reemergence of love. The second part is preferable to the first part. As the second half raises multiple questions in the mind of readers.

It was a fast read for me. I liked the scenes and events which take place in an engineering college. A good storyline with some different segments in it. The end of the story is totally unpredictable and will leave you open-mouthed. I felt that the blurb of the book could be much better. Besides this, in some portions there are few grammatical and editing errors which could be the reason for lack of interest of readers.

The twists and turns which occur in Robin’s life are capable of holding one’s attention. As you will be linked to the story, it will add up to your curiosity. Robin, the protagonist of the story is absolutely powerful and eventually he did what was right in the climax of the story. A belief in the basic goodness of mankind is portrayed in the book. Those who exclusively like love stories, this one is a definite book for you guys.