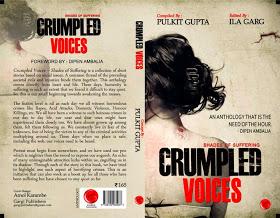 ‘Crumpled Voices:’ is an anthology book of twenty short stories and three poems that are laid down to show different facets of society giving a voice to social issues. Crumpled Voices broadcasts layers of different traumas society is covered with.It displays almost all the social issues this society has been a part of and is still suffering from the same.

Down the way by Ila Garg

The book inaugarates with an emotional and beautiful poem singing the song of trees’ mysteries.It trickles the clock in our mind speaking of all the blessings trees has given us so far ,and what we are offering it in return.

This is who I am by Ila Garg

It is a simpatico tale of homosexuality emotionalising the part of exemplar’s side by being not adopted by the society.I wish the story could have more facets or flavours to show.The story becomes so candid that it missed the spice it should have.Although, I liked authoress writing style and it provides a comfortable reading.

A story laced with misunderstandings and painful emotions of two couples and how that one facet of their life shattered their love and change their life.I like the way this story ends.It holds the emotions properly and leaves reader with multiple emotions and thoughts.The only thing I don’t like about the story is description of places.In short stories usually elaboration of places doesn’t seem good ,according to me.

The Last Whisper by Tanya Shrivastava

A story of love, displaying present status of women in the society and how they still are a part of men’s torture.A story implemented and presented well. A heart-touching story that is laid down by the authoress in a wonderful way.Story is balanced and it displays all the flavours the story demands.On the other hand, authoress owns a good writing fashion.

It is Honourable by Abhik Chakraborty

A story of commiting a crime of falling in love with a person who is of another caste. Author impressed me by his way of presenting emotions through words.Though the story has nothing new to read, but it displays the emotions of the victim very well.

The Curious Case of Missing Brahmins by Abhishek ‘Atul’

A well written and witty story reflecting the page of today’s era education system and how it turned into a business of gaining money.A beautiful story stitched with History and Philosophy.I liked the way the story is served with epic sense.

Color of a butterfly by Promilla Qazi

A story of a woman and the strength she gained while treading the path from being weak to strong.From the very beginning to the end, a constant pace has been maintained by the authoress.A good story teaching a great lesson at the end.

A story of how Indian wifes are still a part of torture and keeping themselves mum.It also narrates the tale when women are being mentally and physically tortured for not being able to give birth to baby- boy.I found the story quite common and known to everyone.It could be told in a different way showcasing a new storyline keeping the theme same.

The Corrupt Me by Nitesh Chitranshi

It narrates a story of Corruption and Honesty which could be happened with anyone of us in same or another way.Albeit the story is simple ,but it teaches a great lesson.A good effort.

The Fatal pride by Sreelekha Chatterjee

A story of how a small incident in exemplar’s life dragged him to become a criminal.It also narrates how number of criminals and crimes are increasing day by day.A nice try with an old storyline.

The Paradise by Prachi Priyanka

An interesting story sprinkled with love, guilt, remorse and feeling of heaven.A good attempt by the authoress to curve the story at different ends and presenting it infront of readers in a fruitful way in order to make the readers turning the pages.

The story basically states that ‘Everybody has to pay for their sin one day.’ A wonderful story with an appropriate title and engaging narration.

She was Raped by Nitin Soni

She was Raped is a straight forward dictation of thoughts in the form of poem written to let society know that our nation is no more a ‘Golden Bird’ or ‘Incredible India’ where crimes like rape is on heat.The poem is laid down in simple words by the poet but could be presented in a much better way.

The Crescendo of a Grand Symphony

I found the story quite confusing due to the narration style adopted by the author.Although a nice storyline but could be presented in a different and a much interactive way.

A letter to God by Sandeep Sharma

A story of 10 year old housemaid and her lovely desire.Author’s writing style has the prowess to make reader glued to his writing.He presented the short story in an attractive manner. A heart-wrenching and tear-jerker story.

A story in which girl-child are supposed to be bringing bad luck.Authoress has came up with a really nice story line and she has also presented it in a humourous way creating proper amount of suspense and sprinkling emotions.

The Indecent Profession by Durgesh Shastri

A beautiful story blended with love, lust, punishment and such professions which are ruining our society.It also states the statement ‘What goes around comes around.’A very good work by the author.

This is a story about criminals and their horrendous crimes victim has to suffer from.This story comes out with a message to bring out our strength and raise voice for our cause so that no other people can face the same.A nice story.

The story is about those women whose wings of freedom got cut while entering in a new stage of life called ‘marriage’.Apart from doing household chores ,still at some places women are not allowed to do work of their own choice.A good story and presented nicely.

A Second Chance By Gayatri Aptekar

In this world of technology, love, care and time are devoted to technologies as if it is the only world.This story speaks out the same with a good storyline and nice narration.

A story of a blind woman and how mysterically a truth unfolds at the end.One of the lovely story from this book.Author framed a witty storyline in the form of a short story in a beautifully organized way presenting a treat to the readers.

Together We Can Make by Priyanka Bansal

A story about people’s lack of knowledge about HIV and their pre-assumptions that made the infected person hurt by their behaviour.A nice story with a nice end.

Don’t Decolorize Me by Priyanka Bansal

This book ends with an urging poem to stop exploiting people through Acid Attack.This poem comes with an urge to stop this devil act portraying how much love one does with himself/herself.A nice poem.

All in all, this book comprises of such work that holds the power to change the society’s thinking which is way required at this period of time.Recommended.