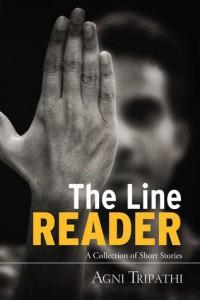 Blurb : A youngster decides to play a prank on his friends, pretending to be able to read the lines on their palms. But, what he sees on his own palm shocks him. Do the lines truly foretell what is in store for one?

A young couple suffers the perennial perplexities of young love. Is this one the soul-mate? Are the feelings mutual? Can they speak their minds out in time?

A young man masters the technique to wipe out memories. What could the consequence be?

Woven around the myriad ironies that are a part and parcel of complex human relations, moving from the tranquil hills to the sweltering plains, touching upon the lives of Metropolitan cities and the remotest rural villages, this collection of short stories will take you through the lives of the various protagonists, who are typical to India in her magnificent diversity.

Written in a lucid style with a mix of humour and pathos, the stories are sure to touch your hearts as they unfold…

‘The Line Reader’ is a collection of short stories. It comprises of 22 stories each having a different flavor. The stories dwell in the book are fascinating and it will definitely hold you from the very beginning.Talking about the very first story—

Fasting to Liberation : It’s a story about a doctor who is posted to a new place. He is lost in his memories and is seeing people who are fasting to liberation. The story is nicely presented in front of readers.

Killer : As the name suggests, the story is about a killer who is hunting the innocent people for his cause. Police officers are trying their best to catch the killer and are scrutinizing about the events one by one. The story is very nicely unfolded in front of the readers but readers need to read the story without losing their concentration otherwise they need to re-read the story.

Parting Gift : It’s a story about a gift i.e. a swiss chocolate box which is lost somewhere and protagonist’s friend is searching hard for it in their whole room. A story narrated very well.

The Line Reader : After reading the blurb I was very much excited to find the blurb in the book and then there is the story which defines the blurb. The story is about four friends who were hanging out together and then one of them plays a prank; a prank of reading palm lines and predicting future. A nice story based on palmistry.

Love Birds : It’s a love story of college students who were departed for some time. They both were at railway station and waiting for the train which was 40 minutes late. The story is based on the conversation played between four people on the railway station.

Bongaon Local : It’s a story about a graduate student who is posted to a village for initial few years of his career. The student is travelling by train and is already scared because of empty compartment and to top it there comes a man who unfolds the threaten secret about the village i.e. the village is scary and people are missing by every passing day.

Photograph : The story focuses on Electronic eraser which erases the memories or some part of the memory. An interesting read!

God’s own Child : It’s a story about a Muslim boy. The story made an emphasis on the difference i.e. there is no difference between the human beings in God’s eye. But the people on the earth always make differences on the basis of caste and religion.

My Gentleman : It’s a story about a man who on his journey in a bus finds a gentleman. The story is based on a ticket drama played in the bus between the gentleman, man and the bus conductor. A good read.

Found : The story is centered around a lost umbrella. A student already in debt lost his umbrella and manages his expenses somehow. Then after asking for extra umbrella from his friends he moved to ‘Lost and Found’ place to get an umbrella and at last he owns his umbrella again.

Shall We Dance? : The story is about a dancing couple who takes part in several couple dance competitions and wins a few of them also. The story is rolled around dancing episode of their life.

Innocent : It’s a story about a child who is excited about his birthday. His day was awesome and he also gets numerous gifts. He unwrapped the gifts one by one and happy to have the most beautiful gift that day.

Mr. Ghosh’s Bungalow : The story is centered around Mr. Ghosh and his daughter. Mr. Ghosh who is excited for his daughter’s marriage is left in trauma and anguish when he came to know about the hidden marriage of her daughter. A common story!

Tale of Maxriter : The story opens very precisely. The story will turn your way to find the existence of a pen which is present in protagonist’s bag. Protagonist is thinking that why this pen is residing in his bag. He is then lost in train of thoughts to find the reason about the pen’s dwelling in his bag. A fascinating read!

Operation Infecto Leaderous : It’s a story about a political leader who is sick. Doctor said that he may be suffering from measles. The doctor is waiting for the reports to find the actual disease.

The Other Couple : It’s a story about a couple who are lost in their own world but suddenly a caller interrupts them. The call is from a child who is alone at home and is calling to talk to her mother.

All’s Well that Ends Well : The story is completely symmetrical along the title. It’s a story about a bomb tragedy on a train. The story rolls gracefully and everything will be clear at the end. The characters are played very well in story.

My Friend Jyothi : The story is about a boy who is admitted to a new school. He befriends with Jyothi on the very first day. The protagonist is lost in memories of Jyothi; how he befriends him, how people talk about the biryani tragedy and how people say him to stay away from Jyothi. After so many years he again meets with his friend whose identity is changed now.

The Meeting : The story is based on the meeting of two people who are in love but they never meet each other. They never meet in-person with each other and the time came when after numerous hours of talking day and night they are meeting. They are happy and excited at the same time. But soon this happiness vanishes when Sayak came to know about the accident of Ria through an unknown person who is calling from her mobile. Sayak was in trauma and very sad when he came to know about all this. The story becomes interesting when a reader came to know that Ria’s mobile is stolen and she is waiting for Sayak at the decided place. A very nice story.

Yesterday : It’s a story about past love which exits in present also. Two people who are in love departed away few years back. Now destiny gave them second chance when they meet again but it seems like they are not aware about each other’s life. They both met and they were still having feelings for each other but they both lied that they are married. A touchy story!

The writing style is easy and the narration done by the author is smooth. Different genres are presented in a single book. Author has weaved every story very nicely. I found only a few stories having a common theme and all other stories are simply awesome. Some of the stories are having tints of sadness and some may make you smile. Some stories may fill you up with emotions and some may surprise you.

The reading journey is very interesting that I had completed the book in one go. I was very excited to detangle these interesting stories one after another. It is a book with different varieties to serve to its readers. Author has done a very good work in his debut novel; looking forward to read more from him.

All in all an amazing read. Recommended to everyone who enjoys reading short stories.