Title : My Daughter The Racist 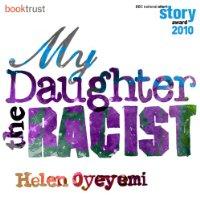 “My Daughter The Racist” is one of the winning short story in the BBC National Short Story Award 2010.Everyone wants to live free in this world.No one wants to get bind around other’s order.The author highlights about the freeness of an individual.

The story begins with illuminating the character and personality of the protagonist,an eight year old girl who makes a vow to her mother that she is going to be a racist against soldiers.In the story the mother of the protagonist spin a yarn about her husband,her mother,her daughter,the boys of her village,Bilal,Naura and the Scrawny soldier.She recites that the village is not peacefull and the villagers had trapped the feeling of bete noire for foreign soldiers inside them.They always gaze at them with ill will feeling.

The story drives as the petite girl with gigantic thoughts shows valor and stand infront of the soldier’s truck and start hurling the stones pointing them to leave their village.Later on the story moves around the scrawny soldier’s visit to their house and conversations.At the end of the story the soldier stop visting their house on request of the girl’s mother.The little girl ignorant of mother’s request keep on waiting for her friend that is the scrawny soldier.

The storyline is about the feeling of love and ardour having for one’s populace.It shows the courage,infatuation,faith and the light at the end of the tunnel to an obstacle one have in his mind regarding his nation.The story reminds of a natinalist.

Author picked up simple language which is easy to go through.Narration is smooth and incomplex.The connectivity and flow of the story is good which makes it easy to catch and had locked me up all the time while reading it.

I had got a cloak and dagger feeling about the name of the protagonist which is emphasized but not unleashed.

A good read.Recommended to a ardent and nation devoted reader.