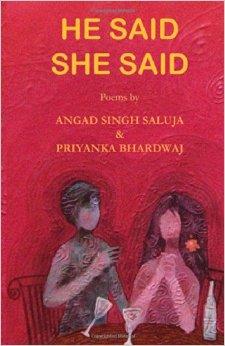 Title : He said She said

An approaching and different title with an inviting cover design gained my attention at first.Prior to the content of the book, the title perfectly suits it and the cover design too makes a good impression.

The book is divided into two portions doing justice with the title of the book: poems from He’s side(Poems offered from Angad Singh Saluja) and She’s side (poems offered from Priyanka Bharadwaj).

This is the second time I was reading poems by Angad Singh Saluja’s.Impressed by his first book, I was pretty excited to read this one.Asusual,he portrayed his thoughts very well through poems.Blending his thoughts, imaginations and feelings he presented all of the poems in a lucid manner.The poems from He’s side needs more strength to render its aroma and a lasting effect.Albeit, like his first book namely ”The Chords of Life” he has used a simple language and laid down his thoughts in a facile way. Also I felt that his poems lacking the elicir to last its impression.Although they are good at one read.But those poems are cherished most which you want to read,read and re-read and you never get tired of reading them.

In his previous collection of poems he has worked on different topics while in this book he dealt with few broadcasting the feelings of being left alone by beloved, betrayal and some fresh and sensitive topics like rape victims, justice to love, Breathe in the death bed.My favourite poem from ‘his’ collection are Born Once Born Twice,Yes,I’m Raped,Covered. Some poems are really mesmerizing while some just stand at the niche of nice and could be implemented in a much better way,although not disappointing. His prowess is his facile way of presenting his thoughts that surely gains one of my vote.

The poem’s from Priyanka’s side offers a great delight.Albeit I was reading her writings for the first time they impressed me to a great extent.She maintains a charm in each of her poem.The way she has presented poems impressed me a lot.Her way of broadcasting her thoughts in the form of poems enriches reader’s heart.The thing I like most about this section is the poetess’ way of implementation.Albeit for a new reader, this section might be a tough task but for an ardent reader it would be fun.My favourite poems ‘her’ wardrobe are ‘Font 35’, ‘I Am Afraid’,’The Old Woman,The Old Man’.

Both the poets owns different presenting style but they came out with a good collection of poems.For a novice reader of poems, this book is a good one to go with.You would get two different fashion of representation of poet’s thoughts that too in a friendly manner.Altogether, I really liked all the poems amalgamated in the book and they together served me a good treat.